Rotary Club of Tagbilaran. The trial part 1. The Price to pay. Our masters' recipe on how to punish a president.

Rotarians and friends, here I am again after a long break sitting back watching on events unfold in Bohol, so unusual and incomprehensible that strikes me as many others aware of the situation, as a masquerade taking place in a court of law in Tagbilaran Bohol Philippines.

Conflicts, misunderstanding rivalry exists within any group of people that gather to achieve a common goal, be a club, a church or a fraternity; usually will end up with the exclusion of one party preserving so the unity of the group, exclusion not always carefully and rightfully planned and executed. The last place you would have expect this to happen is the Rotary International. Is this the first time that happened? We don’t know. Don’t count on Rotary to tell you, neither on active Rotarians. It’s a secret. But this one is not a secret. Just a stupid one you might think? Not at all! It's an intimidation of barbarians, well trained foreigners rotarians against shy, law abide and mistrusting the judicial system Filipino citizens.

Here is the complaint.

Give me a glass of wine please!

At the center stage of this unusual story are I, Evan Iliadis, former Rotarian member of the Rotary Club of Tagbilaran, Derek Pyrah, chairman of the now defunct VILLAGE AIDE PROGRAM (VAP for short) Dave and Baby Collins managers of the VAP in the Philippines and wannabe bosses of the Rotary club of Tagbilaran. There are some others to be introduced shortly. For those that are new on this blog and want to be familiar with the origin of the conflict they should take a look here

As I mentioned in the page you just read, I received all kind of mails but I have never mentioned a particular one I was receiving from the beginning by some critics and sympathizers as well. They were accusing me of covering up the Rotary Club of Tagbilaran in my assertion that no one in the club knew about the embezzlement by the Collins and Derek Pyrah of Matching Grants Money and donations. As one put it “ Evan I don’t know a Rotary Club throughout the world that does not include at least one accountant, a lawyer and a few businessmen familiar with accounting and business practices. Taking a look on the classifications of the members of your club they were all there.”

Indeed, a very embarrassing remark, nevertheless it comes from some one that has no clue how a typical club functions in the third world particularly the Philippines. This requires a separate topic to explain, it may come in a future update or may be down the road here. But the most embarrassing mail on the subject did not come from a Rotarian but an outsider who followed the events from day one and now follows the court proceedings closely. He does not understand what is taking place, who’s who, wants what and why. Frankly, I have been a bit disturbed by his remarks and questions to me, I feel the need to approach the facts with a touch of honesty as I always did and publicly as I always do.

to revisit the 3860 District conference held in Cebu March 2008 where a jubilating DG Yumi Espina thought that he had accomplished so much during his tenure as governor that he deserved to throw a half Persepolis half Hollywood style party to the district expenses. The Canadian “dream team” he imported for the event was composed by a controversial PDG that came as “the personal envoy of the RI president” another one was the Rotary representative in the UN, two or three others unknown PP and PDG that gained some fame in their home town in Canada for bringing a few used laptops with them –obsolete in Canada dump them to the Philippines - plus of course the local cream of Rotarians and non.

Abundance of gourmet food and drinks, dancers, parades, men in military uniform forming a sword canopy for the introduction of the big shots, speeches and crocodile tears about the poor and destitute the dream team wowed “to change all that” “Son et lumière” effects and much more. (Let me know if the life of the poor Cebuano has changed ever since)…The event appeared for awhile on the District’s web site with more than 300 photos then disappeared, not even cached pages can be found other than 2 or 3 bad quality clips on YouTube not worth a referral. Oh well… who cares about dream teams any more…

But Derek Pyrah did care and counting on, the dream team that is, for two things: One, put the Rotary club of Tagbilaran (RCT) out of business and let Collins create a new one from scratch, two, had the first fail as being too ambitious and hard to accomplish, pressure the DG Yumi Espina to rehabilitate former Rotarians Dave and Baby Collins and Deo Dioscoro and accommodate them to another club in the district. He worked out a clever plan implemented  as follows:

He came to the event with his own "dream team" from Australia with PDG Bill Litle and a couple of others bringing with them, in addition to a camera a set of a band drums some rice and cans of sardines and some t-shirts. He opened shop inside the convention exposing the usual dramatic “pitsures” and PP presentations “where people can’t hold their tears “ etc. That’s all? No! he had in his suitcase two Paul Harris Fellow awards bought for Dave and Baby Collins (Remember, he was a Matching Grants trader and as such he had a big discount.) March 14th 2008 they charged the execution for the first step of the conspiracy to John Van-laar Past District Rotary Governor somewhere in Canada. He presented the PHF award bought by Pyrah to David Collins announcing him as a member of the RCT and to Baby Collins as a member of the Rotary club of …Cebu!.. in the presence of many members of the RCT on the DISCON event floor where the ceremony took place.
But the truth is, none of the recipients was a member of the RCT, they deserted it in October of 2007 to avoid answering questions and stripped of their membership in January 2008 as you’ll soon have the opportunity to see the letter of termination. Even worst, how Baby Collins became a member of the Rotary club of Cebu without prior clearance and recommendation of her original club the RCT as required by the Rotary bylaws? They –Collins – say they didn’t know about their termination, didn’t they? Governor Espina didn’t know? If the governor doesn’t know who’s in who’s out in his district who does? Rotarians, trust me, they all knew, but it was in their agenda to pretend not to, in an attempt to ambush the RCT. And it worked. After the award ceremony the“ family photo” was
taken as seen above with the capture published to the VAP web site. I took care immediately to dismantle their plans and lies by updating my web site and tell the world the truth here. But what I have told the world didn’t matter as much as where the RCT should go from here. A big challenge for inexperienced low profile Rotarians living in the third world recipients of Derek Pyrah’s rice and sardines facing a group of predators trained in subtle feathered manipulations and conspiracies in the first world.

Then, the gang put in place part 2 of the conspiracy plan. They brought both "dream teams" to Bohol to "see by themselves how the life on this island has changed thanks to those saviors sent by God to alleviate the misery...." What the poor would have endure without them! 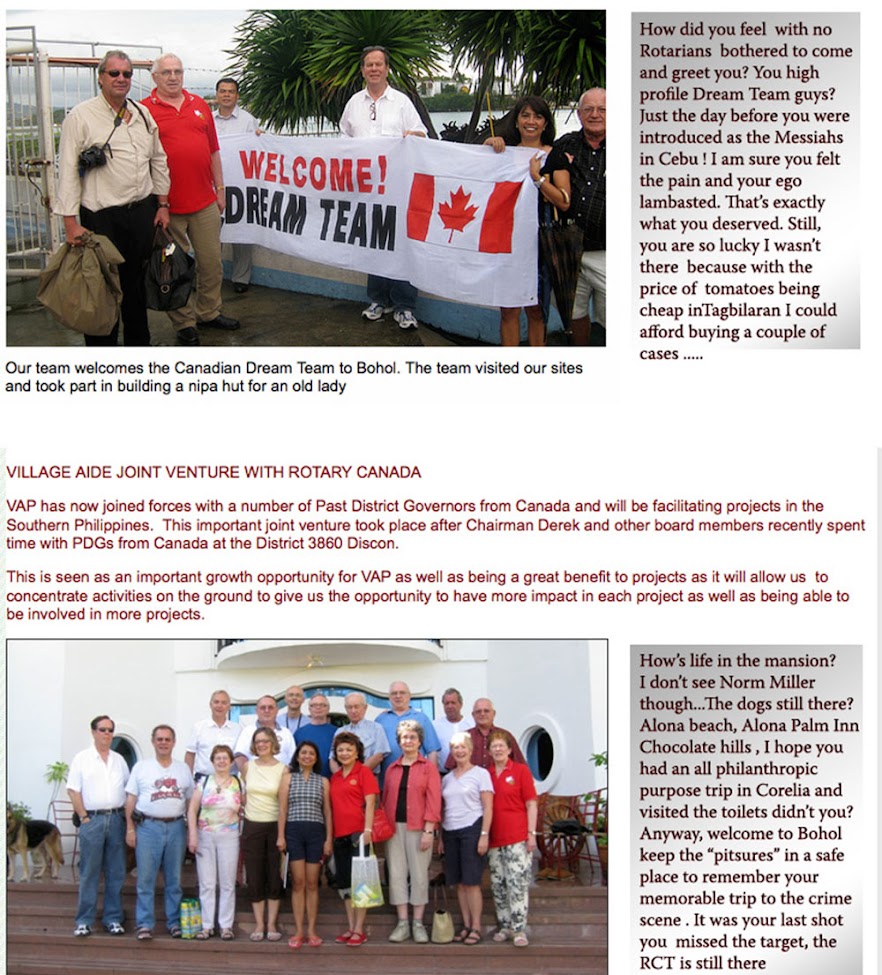 Reality is, this wasn't the reason that Pyrah and Collins brought them to Bohol but to demonstrate they were still the bosses deciding over life or death of the RCT sending them a message "submit or die" These high profile Rotarian people will not even say hello to you if you don't kiss their asses and comply with their orders consisting of reinstating the Collins plus - and most important - anathematize in a clear and strong way this traitor Evan ILIADIS who started this war against us. Indeed, they totaly ignored the RCT and even more the other club RCUT. They haven't visited any.

Once the smoke cleared and in the days that followed the attack the gang realized that no harm was done to the RCT as they anticipated. Desperate to capitalize on money and time spent firing bullets on the RCT Collins fired his last misile. Through his lawyer, he served a summon to the DG Yumi Espina asking him to delist the Rotary Club of Tagbilaran based on obscure, unfounded motives. Espina refuged the request, not for sympathy to the Club but for fear to the RI that is struggling to increase the membership and here comes a governor closing a club!... It was now clear to anyone the... evil team's demolition plan did not produce results, therefore going to rest or at least that's what every one thought. 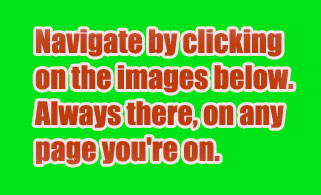 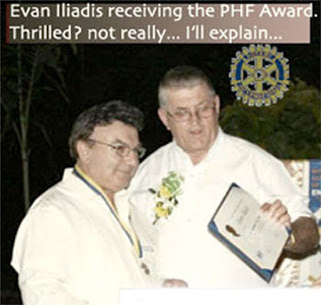 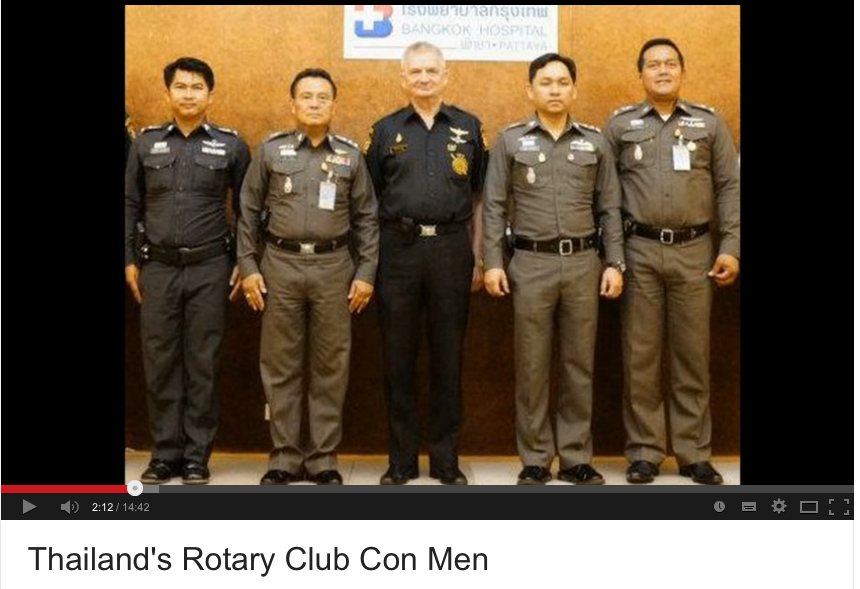 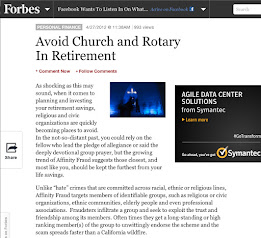 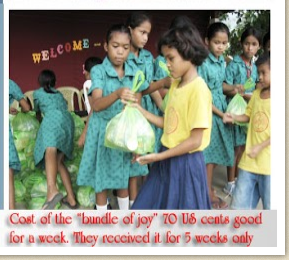 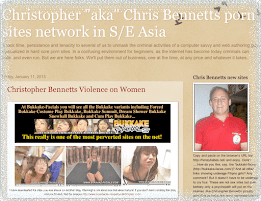